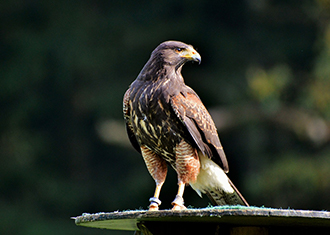 Surrounded by coastline, Ocean Shores is a perfect home for nesting shorebirds from all across the Western United States. And that makes our home an equally attractive destination for our world’s fastest animal, the Peregrine Falcon.

The peregrine falcon is one of nature’s most fascinating predators. Found atop city skyscrapers around the nation, this predatory bird is also quite comfortable soaring off the coast of Ocean Shores, hunting and resting in spots all across our city. As you plan to visit Ocean Shores, we are here to let you know where can you find them, and just what they are doing at the Shores.

There are a lot of predators in the animal kingdom. Carnivores are scattered all across America, and come in all shapes and sizes. We see many of these animals in daily life, while others are relegated to exhibits in our favorite zoos. But what makes the peregrine falcon so unique is that it is avivorous, that is, it feeds on other birds. And Ocean Shores has a lot of birds on our Washington coast. During larger migrations, as bigger birds visit Ocean Shores, our shoreline can be covered with several kinds of shorebirds, and that is a perfect environment for this apex predator. While mainly hunting smaller birds (doves, pigeons, etc.), peregrine falcons have been known to hunt birds up to twice their size! So the gulls that call our city home all year long can easily become prey. 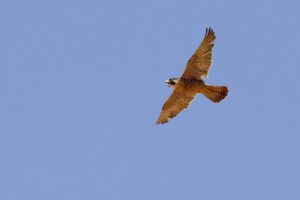 And the peregrine falcon isn’t just fast. It’s the fastest animal on Earth! Yes, faster than cheetahs and gazelles, rabbits and other birds, the top speeds for this Washington coast hunter occur in the midst of it’s hunting dive, called a stoop. Imagine seeing a falcon dive from the sky, topping nearly 200mph, and landing right on to its otherwise unaware prey. If you are into birding and photography, that’s a moment in nature just waiting to be captured. But you will have to be pretty fast with the lens to snap that shot.

Now, if you’re birding or adventuring across the Shores around March to May, and you spot a nesting peregrine falcon, be careful. These falcons mate and reproduce during this Spring season, with the pair of parents staying together forever. So if you spot one protecting its nest, there is likely another one nearby, hunting. During the breeding season, chicks depend on their parents to hunt for them even after they first learn to fly. So adult falcons become very territorial.

Whether you’re looking for that epic photo or a once in a lifetime view of this unique bird of prey, or you would rather avoid getting too close and just admire them from a distance, it’s important to know where peregrine falcons live, hunt, and grow their families.

As we’ve mentioned, Ocean Shores is the perfect hunting ground for the peregrine falcon. But our open shoreline, complete with miles of visibility off the coast, is only one area where hunting is best done. Rocky areas, like our magnificent jetty to the south offer a unique area to hunt, while low lying areas around our lakes and canals are also great spots for a hungry falcon to find food.

Where rest and reproduction are concerned, peregrine falcons look for safety. Rocky areas, cliff faces, and overhangs are the most popular picks. Low-lying areas that offer hard cover and vegetation are also good bets. So as you wander about the south end of town, keep your eyes open and use an abundance of caution in the Oyhut Wildlife Recreation Area and around Damon Point. These are certainly creatures worth spotting, but they are among the very best on Earth at surviving and hunting. So honor them and their spaces. 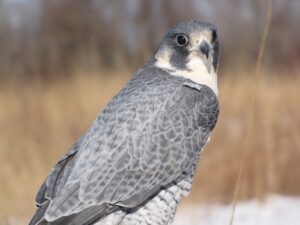 Ocean Shores boasts dozens of bird species throughout the year. Many of these beautiful birds live in harmony with one another, and much of the wildlife around them. But predators need prey, and we can respect that too. And we are honored to host the fastest animal in the world, in one of the best adventuring venues on the Washington coast. As these peregrine falcons explore the shores, we invite you to explore with them!