Face to Palm: Finding the Palm Warbler in Ocean Shores 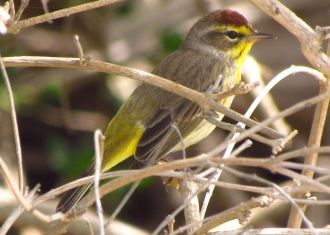 While not an endangered species, the Palm Warbler is not the easiest bird to spot in the Western half of the United States. But they’ve been spotted in Ocean Shores, and you can find them too!

The palm warbler is a unique, beautiful songbird that is most popularly found throughout Canada, migrating down into the eastern United States. But the more western traveling warblers, unimaginatively known as Brown, or Western Palm Warblers, can be spotted in a few spots along the Washington coast. For the avid watcher that is looking for a birding spot on the west coast, Ocean Shores is the spot to stop in and find this rare species. 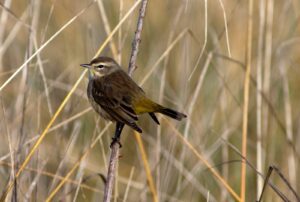 How to Know That’s a Palm Warbler

Warblers are a smaller species of bird. But the palm warbler is not without its own distinctive markers and habits that help it stand out. The Western Palm Warbler wears a distinctive rufous cap, that is, it has a red or rust colored crown on its head. This special marker is generally found on both genders, and throughout the year regardless of season and breeding status. But the body of the Western, as opposed to Yellow Palm Warbler seen on the eastern side of the United States, is generally more brown year round. Another good indicator of this bird is the flashes of yellow underneath its wings.

Western Palm Warblers make their way to areas like Ocean Shores in the fall and winter seasons during migration. While the majority of warblers migrate eastward, the Western Palm Warbler stays to the coastal areas of Washington, Oregon, and California. Uniquely, many of the warblers that make their way westward are not migrating for breeding purposes. So the chances of catching a shot of their milky colored eggs with light brown markings, while visiting Ocean Shores is very slim.

Stepping in the Scot’s Broom

Another wonderfully unique characterization of the palm warbler is where they can be found on the Shores. Warblers nest, breed, and migrate to habitats on the ground. So to find this rare bird you will want to find the most Scot’s Broom available. Also called Scottish Broom or Irish Broom, this rapid-spreading shrub kills native plant life, even trees. It can range from three to ten feet tall, flowers a yellow pea, and spends much of the seasons bare-stemmed, green and brown in appearance, and stays moss-covered. The coloring is a perfect camouflage for the brown palm warblers. And to make the habitat even less appealing, it is considered a class B noxious weed, toxic to horses and livestock.

If you’re looking for Scot’s Broom in Ocean Shores, check out the Marina and the Oyhut Wildlife Recreation Area, as both areas have ample coverage of this shrub. Just don’t eat anything from it!

And while you’re exploring throughout the southern ends of Ocean Shores, the palm warbler will likely be foraging for beetles, mosquitos, caterpillars, ants, and bees, or scrounging around for available berries and seeds. 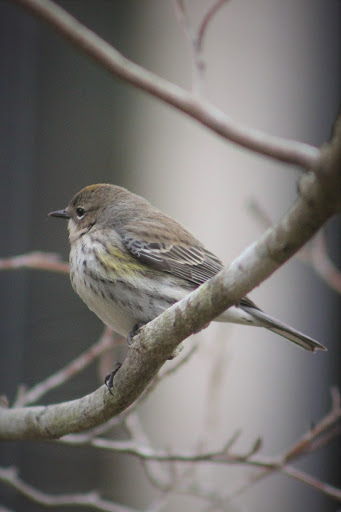 ‘Fall’ for the Shores

Imagine catching glimpses of several species of shorebirds as you drive down Ocean Beach, seeing the Brown Pelicans soar across the bay as you stand by the jetty, on your way to catching a Peregrine Falcon stoop in for a meal nearby Damon Point. This is the birding destination that is Ocean Shores. And this Fall, we hope you come and catch a glimpse of the beautiful Western Palm Warbler, nestled in our southernmost points, as it rests from its busy breeding season.